Precisely from the 10th of December, 2022, the wave of political activities in Gombe state took a lively turn when Governor Muhammadu Inuwa Yahaya and standard bearer of the All Progressives Congress, APC launched his gubernatorial campaign at the Pantami Township Stadium Gombe.

The official launch of Governor Inuwa Yahaya’s re-election campaign signalled the commencement of the ward-to-ward rally in which the Gombe State Governor has since and successfully peregrined the one hundred and fourteen political wards scattered across the 11 Local Government Areas of the State.

As a journalist previledged to be on the campaign trail, I saw first hand, the avowed commitment, unlimited enthusiasm, genuine show of love, support and solidarity that usually greeted the Governor’s motorcade each time it berthed in every of the 114 political wards of the State. 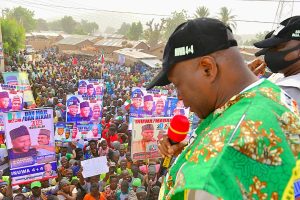 From the three Senatorial Districts of Gombe South, North and Central, the Governor’s cult-like followership are way beyond what the human mind can easily comprehend. 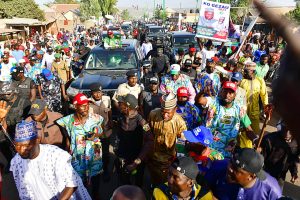 Little wonder that speakers across social and economic divides described the Governor as a cosmopolitan leader with an undying penchant for transformational development. This perhaps may be the reason behind the Governor’s astronomical rise in popularity and acceptability.

For instance, in the last three and half years, Governor Inuwa’s approach to futuristic development has been adjudged by National and International governmental and non-governmental organisations as the best money can buy. 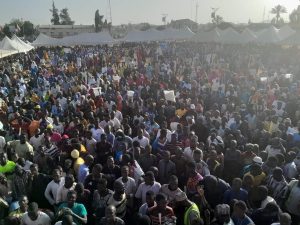 From the multi-billion naira Muhammadu Buhari Industrial Park to the Network Eleven Hundred road revolution project which has since opened up rural and semi-urban communities for socio-economic activities. The Governor has equally made far-reaching reforms and initiated interventions in health, education and the civil service for effective and efficient service delivery.

So many positives to talk about in the administration of Governor Muhammadu Inuwa Yahaya. Some of his flagship projects have not only distinguished the Governor but have succeeded in placing the state on the path of sustainable economic development. 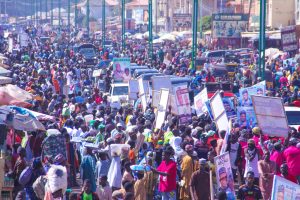 The accomplishments of these projects and so many more as encapsulated in the Governor’s policy document and development agenda- the DEVAGOM, makes the 27-day ward-to- ward campaign even more easier and reassuring.

At the various campaign grounds, Governor Inuwa Yahaya enjoined supporters of the APC to stay true to the party in view of it’s an unwavering commitment to the welfare and well-being of Nigerians in general and the people of Gombe State in particular, referencing the political will to exploit the oil in Kolmani area of the State and implement the Kolmani Integrated Development Project.

Legion of APC juggernauts and high-profile defectors from major opposition parties in the state said they found in Governor Inuwa Yahaya a leader with a progressive mindset who deserves support in the interest of the state.

The traditional leadership for which the Governor recently reviewed their remuneration in line with current realities, were unsparing in their support and solidarity to the Governor. A case in point was when the Emir of Yamaltu, Abubakar Aliyu described Governor Muhammadu Inuwa Yahaya as having the leadership attributes and qualities of the late Northern Premier, Sir Ahmadu Bello owing to his uncommon patriotism and visionary disposition. 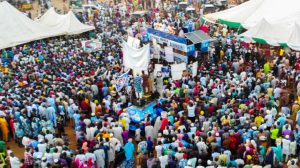 Despite these accolades for a typical to go home sleeping, however, Governor Inuwa Yahaya appears not to be developing cold feet towards delivering the dividends of democracy to the people. Even at the heat of the electioneering campaigns, more projects like roads and the expansion of the Gombe water scheme are ongoing. More projects are also in the offing sequel to the bid opening recently conducted by the State Ministry of Works.

The list of positives of Governor Muhammadu Inuwa Yahaya’s engagement with the people seems endless, particularly as he looks forward to a renewed mandate.

The climax of the Governor’s ward-to-ward campaign rally in Gombe Local Government Area vividly sent a clear and unequivocal signal that Governor Inuwa Yahaya remains a candidate to beat in the forthcoming general election owing to his sublime performance in not only fulfilling his campaign promises but executing projects that are off his 2019 contract will the people.

The Emir of Gombe, Alhaji Dr Abubakar Shehu Abubakar III CFR put a seal on that when he took more than 30 minutes to enumerate the achievements of the Governor in his 3 and a half years of stewardship, saying emphatically, “We thank you most sincerely for building Gombe of our dream. Gombe is now a model under your leadership. we are excelling in all facets of development and we must thank you for that and encourage you with our support “.

The 27- day campaign tour of the 114 political wards of the State clearly demonstrated that the re-election of Governor Muhammadu Inuwa Yahaya is just a matter of when and not if.

Governor Inuwa Yahaya’s second term appears to be assured, based on his high level of acceptance everywhere he went, the number of decampees from other parties, particularly the opposition People’s Democratic Party, and, above all, his record of unprecedented development of the Jewel in Savannah’s socio-economic fabric.

Analysis: Scarcity of the new naira notes and fate of Nigerians ahead looming…