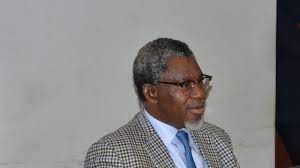 The Minister of Mines and Steel Development, Olamilekan Adegbite, has disclosed that the Airborne Geophysical Survey activities would boost investments in the Nigerian mining sector.

Adegbite said this while inspecting two aircrafts at the Nnamdi Azikiwe International Airport, Abuja, which have been earmarked to be used for Airborne Geophysical Survey Activities on Thursday.

The Minister explained that the survey was critical to de-risking the sector thus making it attractive to both local and foreign investors, adding that the development would ultimately lead to more job creations and increased revenue for government.

The minister equally observed that country had a lot to gain from the survey, explaining that the benefits from the survey would transcend the mining sector into other spheres of the economy.

Adegbite also advised the general public in the States and Local Governments that would be covered by this survey not to panic either as a result of the loud noise of the aircraft due to the low flying altitude maintained by the aircraft or the pattern of movement of the aircraft.