The National Working Committee (NWC) of the All Progressives Congress (APC) has approved a revised timetable/schedule of activities for the primary elections for the 2023 poll.

This is contained in a statement by its National Publicity Secretary, Mr Felix Morka in Abuja.

“The NWC of the APC on Monday, May 23, approved a revised timetable and schedule of activities for the governorship, State House of Assembly, Senate and House of Representatives primary elections,” he said. 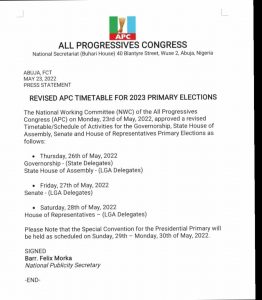 Morka said that the governorship, state delegates, State House of Assembly, and Local Government Area (LGA) delegates primaries would hold on May 26.

Re-emphasised that the party’s Special Convention for its 2023 presidential primary will hold as scheduled on May 29 and 30.

“Please note that the Special Convention for the presidential primaries will be held as scheduled from Sunday, May 29 to Monday, May 30,” Morka said.

Ndume sympathizes with APC supporters over stampede in Borno