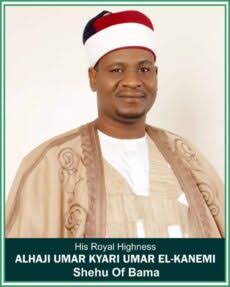 He was born on January 8, 1983 and grew up in Bama Local Government Area.

He went to Central Primary School in Bama. He attended Government College, Maiduguri and later on proceeded to Foundation Secondary School in Maiduguri. He obtained a Diploma in Civil Law at the Umar Ibn Ibrahim College of Education Science and Technology, Bama.

Shehu Umar Kyari Umar El-kanemi is a charming, simple, highly-respected, down-to-earth and charismatic gentleman who is respected by all and sundry across the state and beyond.

Until his appointment as the Shehu of Bama, he was a businessman and the CEO of Bimmbazz (BSBG) Nigeria Limited.

He was appointed on Monday, 4th May, 2020 to succeed his late Father, and was subsequently turbaned on 9th May, 2020.

He was accepted from all and sundry among his subjects. His appointment came with a huge joy and celebration from his subjects as witnessed from the crowd that welcomed him to Bama.

The people of Bama Emirate were further inspired and impressed by his first speech delivered during the Eid El-Fitr on the 24th of May, 2020. The speech earned him many commendations from the elders, businessmen, politicians, youths and women of the Emirate—and the state at large. He also received an award from African Climate Change Research Center (ACCREC) as Climate Champion due to his call on his subjects to desist from cutting trees in his first speech.

He later called for massive and unrelenting prayers from his subjects for their leaders so as to enable them discharge their duties diligently and with the fear of God.

His hobbies are traveling, playing Badminton and horse-riding.

He has travelled to many countries across the world including Chad, Cameroun, Saudi Arabia, U.A.E, Egypt, India and England amongst others.

He is happily married and has four children.

Mele Kyari’s second year of walking the Talk at NNPC