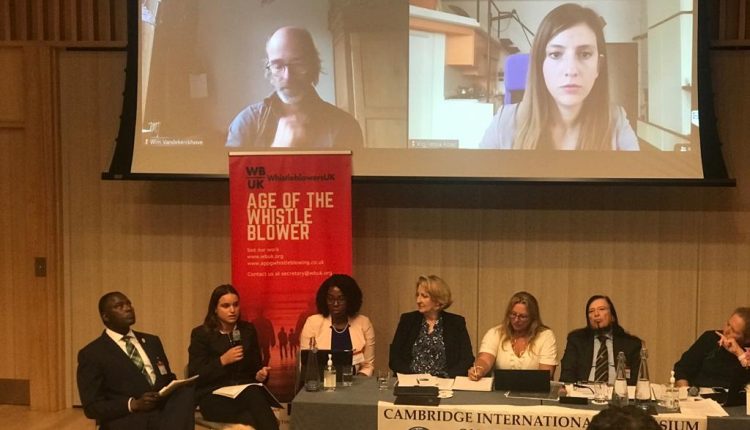 Dr Muhammad Kyari. Dikwa the President and Founder of Al-Ansar Foundation has urged the Federal Government to protect the rights of whistleblowers to enable them to expose more crimes.

Delivering his lecture on the importance of legislation in the successful and effective implementation of whistleblower Policies, at the 38th Symposium on Economic Crime, Jesus College, the University of Cambridge on Saturday, Dikwa described whistleblowing as a key tool in fighting corruption.

He said by promising that their rights will be protected, employees and others who are familiar with the inner workings of an organization and are in a position to see when corruption occurs will be more willing to expose those problems to those who are able to remedy it, or more generally to the public.

Whistleblowers, according to him, often face severe repercussions for their actions. “They lose their jobs or are sanctioned for their activities. Some are charged with crimes for violating laws or employment agreements regarding disclosures of official information. In extreme cases, they face physical danger,” he said.

Dikwa added that over 45 countries around the world have adopted legal regimes to encourage these important disclosures and protect the whistleblowers from retribution.

In his words, “many international agreements and treaties on anti-corruption including the Council of Europe and UN Convention Against Corruption now include requirements that nations adopt these laws. Many organisations are also adopting internal rules to facilitate disclosures.”

He said in Nigeria, the whistleblowing programme is under the management of an office in the Federal Ministry of Finance (FMF) called the Presidential Initiative on Continuous Audit (PICA). The programme, according to him, encourages anyone with information about a violation of financial regulations, mismanagement of public funds and assets, financial malpractices, fraud and theft to report it. He added that the primary purpose of the Whistleblower policy is to encourage people to expose financial or financial-related crimes and to support the fight against financial crimes and corruption.

According to Dikwa, the policy provides specific incentives to whistleblowers. First, a whistleblower is entitled to a monetary reward of between 2.5 to 5 per cent (of the recovery made) where the information disclosed leads to the recovery of proceeds of crime. However, claiming the reward is not automatic. Thus, the information must be about violations unknown to the government previously and could not have otherwise been obtained from any existing publicly available source.

Dikwa, who was the Secretary of the Technical Committee which developed the Whistle-Blower Policy for the Federal Government of Nigeria in the year 2016/2017, said the Whistleblower policy in Nigeria has yielded positive results. He however said despite the success recorded, whistleblowing policy in Nigeria and in many other jurisdictions faces some challenges.

“The first challenge is the lack of a legal framework to give backing to the policy and guaranty compensation to whistleblowers. In some instances, also, it is difficult to determine who should pay compensation since some of the recoveries may be for regional or state governments, the scope of which a policy document may not provide the needed direction.

“For example, in Nigeria, some of the monies recovered through whistleblowing were stolen from states governments, while State Governments are generally happy to receive the money recovered from the Federal Government, they resist paying compensation to the whistleblowers.

“However, since there is no law allowing the Federal Government to deduct from the money recovered or from the allocation of States at the federation account, federal authorities cannot just make deductions and risk litigation with the affected State Government. Thus, whistleblowers turn to the Federal Ministry of Finance for compensation and sometimes with the threat of litigation.

“Consequently, for instance in Nigeria, there has been the yearning for an Act of the National Assembly to give the policy a legal backing to address the challenges and to strengthen the whistleblowing policy,” he said.

NEDC starts construction of 500 houses for IDPs in Yobe