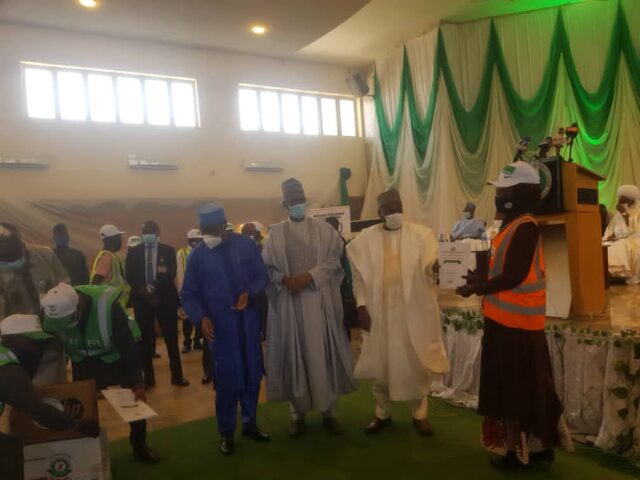 The North-East Development Commission (NEDC) has graduated and presented starter packs to 198 youths who were trained on Information and Communication Technology (ICT) skills in computer graphics and smart phone repairs in Gombe state.

Mr Mohammed Goni Alkali, the Commission’s Managing Director said the ceremony was for the first batch of youths that participated in the ICT skills acquisition training conducted at the Commission’s centre in Gombe.

Alkali said the training was in line with the National Agenda on ICT development in Nigeria to fast-track Economic Recovery and Growth Plan (ERGP) of the FG.

He said that the Commission recognized the critical role of technology in developing inclusive, knowledge-driven and prosperous economy, adding that in recent time, all sectors of human endeavours depended on technology to make any impact.

He stated that out of the 1, 200 trained in the Northeast for the first batch, Gombe state had 198 trainees who were graduating.

According to the NEDC MD, another set of 1,200 candidates had been invited to participate in the second batch of training which he said would commence soon in all the six states of the Northeast.

He stated that the presentation of the free starter packs and the sum of N20, 000 to each of the 198 successful graduands marked the completion of the first batch of the training.

Alkali stated that the Federal Government’s intervention through NEDC in entrepreneurship and ICT training was to empower youth, make them self-reliant and turn them into employers of labour.
Alkali also made other donations as part of the commission’s effort towards supporting the FG and Gombe state’s fight against the second wave of COVID-19.

“ In line with the need to protect against COVID-19 especially among children in both public and private schools, security agencies and the National Union of Road Transport Workers (NURTW), we donate the followings.

He added that the commission having observed the role played by agriculture sector, had also provided agricultural machinery and equipment, seeds, fertilisers, agrochemical and other logistics to enhance the production capacity of smallholder farmers in the sub-region.
He further said there were other Rapid Response Intervention (RRI) Projects in education, health, agriculture in the state while plans were on to build three mega schools and construct 500 houses in the state.
Alkali thanked President Muhammadu Buhari and the Minister of Humanitarian Affairs, Disaster Management and Social Development, Hajiya Sadiya Umar Farouq for their efforts towards empowering youth in the Northeast.

Gov. Inuwa Yahaya of Gombe state thanked the President Muhammadu Buhari for empowering the youths through ICT skills, stressing that the state had also keyed into the digital economy to empower its citizens.

Yahaya stated that his administration would continue to welcome partnerships in ICT in view of the huge potentials it holds in job creation going forward.

One of the beneficiaries, Salihu Mohammed while commending the FG and the NEDC said that the ICT knowledge and the starter packs given to him would empower him to be “self-reliant and productive.”

North East Star Live is a News Media House focusing on live happening within the northeast.
Contact us: info@northeaststarlive.com