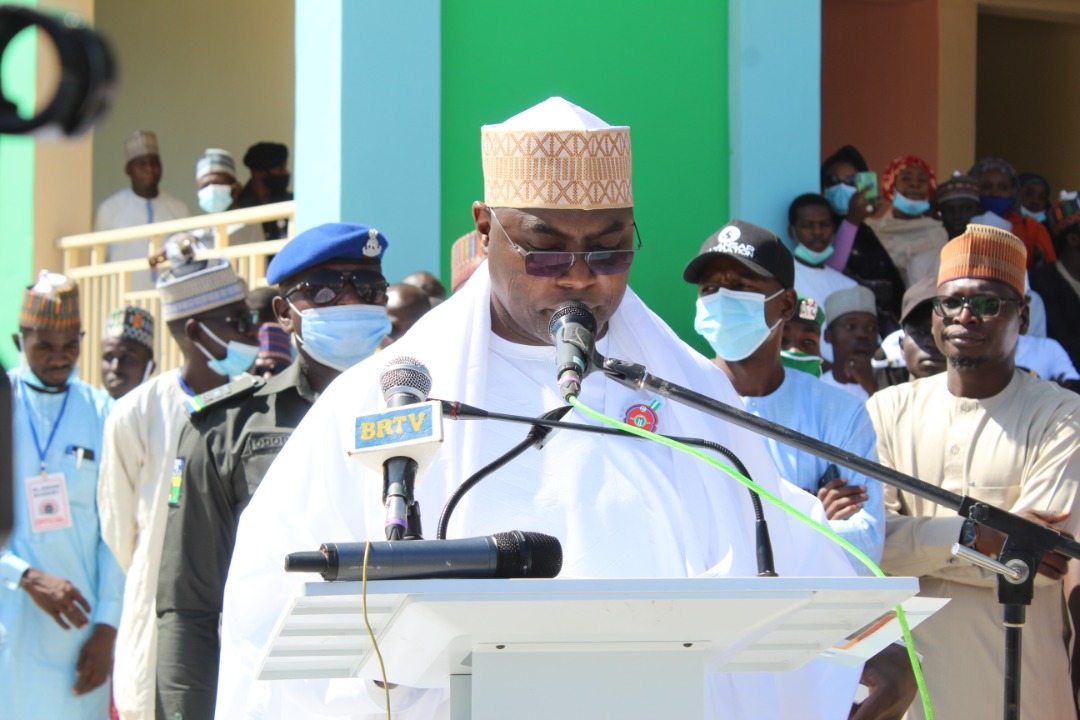 Following the recent challenge of insecurity which has contributed to fall in the standard of education in North eastern states of the federation, Governor of Borno state, Professor Babagana Zulum has commended the founder of Al-Ansar University, Dr. Mohammed Kyari Dikwa for setting in motion a feat which would help address one of the most fundamental challenges facing the state.

In his speech at the ground opening ceremony of the first indigenous Private University in Borno state, the Governor appreciated Dr. Mohammed Dikwa for his initiative in creating a veritable source of encouragement and guidance for students in their relentless cost for a better future for themselves and the society at large.

According to Zulum, the laudable and unprecented idea of Mohammed Dikwa in establishing the varsity would undoubtedly support government’s effort to achieve strong educational standard that can compete with institutions in other states of the federation.

Zulum also said, he was optimistic that the institution will compliment government’s effort in its deliberate attempt to mount children with deep appreciation and understanding of Islam and fear of Allah.

” My administration will support any individual or group willing to partner with the state government to provide the much needed qualitative education at all levels”.

The Governor, however, described the founder of Al-Ansar University Dr. Muhammed Dikwa as not just the son of the state but a highly celebrated national figure in the country therefore calling on other well to do citizens in the state to emulate the act in order to move the state to enviable heights.

He, therefore, pledged his full support to the institution through the state ministry of science and technology by collaborating with its management in the achievement of their objectives.

While speaking the Founder of the Institution, Dr. Mohammed Kyari Dikwa, appreciated the Borno state Governor, Professor Babagana Zulum for his show of love and commitment towards the actualization of Al-Ansar University since his inception.

According to him,” the Foundation is very proud to identify with this kind-hearted mind, selfless leader, man of taste and compassion, a charismatic politician, academician and a great leader whose action has already touched the youth, women and children and also impacted positively on the lives of people in Borno state and beyond”.

Dr. Dikwa assured the state Government and citizens of the state that the product of the institution would serve as a “vaccine for all forms of social vices” in the state, region and the country at large.

The Founder described education as a strong tool that could make or mar any society adding that continuous support, encouragement and development of Al-Ansar University should remain strong objectives in the mind of all authourities both at the Federal and the State levels.

In his statement,” when the academic section of the proposed university is developed in full, it shall have a greater, general and entrepreneurial studies unit, a school of postgraduate, business school and eleven colleges, we shall start with only two colleges, which are the colleges of Art and Management and college of computer sciences”.

He also noted that the institution would be committed to both Western and Islamic education while focusing on research and development for a new level of growth in the world of sciences.

The Don, however, appreciated the effort of relevant stakeholders and traditional leaders across the state for honouring their invitation while promising that the Management of the institution would strive hard to instill in students the fear of Allah.