As the Ember months begin, the Federal Road Safety Corps (FRSC) has warned Nigerians to refrain from embarking on night journeys during the last four months of the year, citing poor visibility due to darkness and the increased number of road accidents emanating from night journey and speeding.

The acting Corps Marshal, Dauda Ali Biu stated this during a press conference with newsmen in Abuja on Thursday, noting that the FRSC was targeting minimal road crashes and zero fatalities during the period.

He said that the Corps had deployed massive personnel to all strategic roads across the nation, as part of the measures to achieve the target. 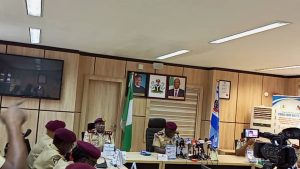 The theme for this year’s Ember Months campaign is, ‘Avoid Speeding, Overloading and Unsafe Tyres to Arrive Alive’.

Mr Biu said that the theme was deliberately chosen to bring to the fore, the collective nature of the campaign and the need for collaborative efforts by all relevant stakeholders, emphasizing that it was to bring the rate and fatality of the crashes within and beyond the period to the barest minimum.

He noted that as part of measures put in place to guarantee a safer motoring environment, especially during the Ember Months, the Corps came up with the idea of special patrols and mega public enlightenment rallies in motor parks, which involve the massive deployment of personnel and logistics to motor parks for aggressive sensitization and the roads, particularly around identified black spots, for the containment of the perennial traffic gridlocks and the accompanying hazards. 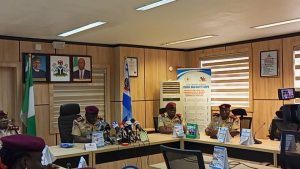 Mr Biu said that the Corps had initiated speed control measures in collaboration with various stakeholders, adding that the most notable was the Speed Limiting Device approved by Standard Organisation of Nigeria in 2015.

According to him, the crashes and fatalities due to night journeys have also become worrisome and demanding urgent need to bring it to a halt, advising travellers during the ember months, to as much as possible avoid night trips.

He explained that the risk of night trips was high due to poor visibility, excessive speed and other unhealthy behaviours of drivers.