It is often said among men that ‘money makes a man, but investment makes a successful man. What Muhammadu Inuwa Yahaya is currently doing in Gombe State, the Jewel in the Savannah is akin to separating Gombe from a mere State in Nigeria to the successful and prosperous one where both the local and the international businessmen look towards as their best Investment destination.

Inuwa did this via the instrumentality of the first-ever Gombe State Investment Summit which recently took place between October 12 and 14, 2022 at the Gombe International Conference Centre. 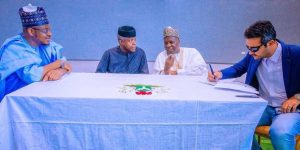 The theme is no less expressive of the genuine intentions of the protagonists of the Summit. It is aptly coined.

The event which was graced with the presence of the Vice President of the Federal Republic of Nigeria, Prof. Yemi Osinbajo, left an indelible social and economic growth blueprint which is capable of catapulting the Jewel in the Savannah from the backyard of economic insignificance into the limelight of international business reckoning.

It was a well-attended summit. The over 500 sitting capacity amphitheatre venue of the summit recorded a full attendance capacity throughout the three days duration. Reputable corporate sponsors and captains of industry were fully represented.

Vice President Yemi Osinbajo heaped accolades on Inuwa Yahaya for his consistent foresight and his knack for scoring many firsts for Gombe State.

He said, “I salute Your Excellency’s focus and your determination to improve the fortunes of Gombe State, especially by positioning it for investments from both foreign and local investors.

“This inaugural Summit, GoInvest, is consistent with Gombe State’s mission to create an enabling environment for sustainable prosperity, peace, cohesion and an all-inclusive development for the people of the State, as contained in the Development Agenda for Gombe State (DEVAGOM) 2021 – 2030.

“The Development Plan itself is perhaps one of the few by a subnational to articulate a detailed long-term vision and plan towards the transformation of the State. In addition, the State developed a full Medium Term Expenditure Framework (MTEF) covering the last two years 2020-2022. So, DEVAGOM 2021-2030, is both a visioning exercise and a concrete road map to the long-term growth and sustainable development of Gombe State.

“I am delighted that we are beginning to harvest the first fruits of the plan. One is the remarkable feat of attaining the first position in the Subnational Ease of Doing Business Baseline Survey Report of 2021. I am also informed that Gombe State was recently invited by the world-renowned Royal Institute of International Affairs, popularly known as the Chatham House, to share its experience in implementing the State’s health system reforms. These validations from different bodies, local and international could not have come by accident.

“They are a product of the strong leadership and commitment that have been demonstrated by Your Excellency and I think this became even clearer even as Governor-elect in 2019.”

Osinbajo opined that his most poignant affirmation of the belief of Gombe State in the notion that government must catalyse economic growth with both policy measures and brick and mortar is the commencement in 2021 of the 1000-hectare Muhammadu Buhari Industrial Park. The first phase of it is almost ready – over 369 hectares of that is ready.

This is to be a purpose-built fully resourced manufacturing and industrial processing hub, designed to accommodate 10 mega factories. The project is important for the value-added functions of the factories and accretion to both internal and national revenue and the jobs that it will create -10,000 direct and 100,000 indirect jobs.

The foreground for successful economic growth has been established by Inuwa Yahaya and Vice President Yemi Osinbajo further validates the superlative accomplishments of Inuwa’s administration.

The Vice President is not done yet. He further enumerates why he thinks Gombe State is on a spectacular economic cruise.

He said, “I think it is fascinating that Governor Inuws Yahaya has approached the development of the State by thinking like a Sovereign state as opposed to thinking as a subnational. This explains why he took the trouble to draw up a 10-year development plan, an MTEF and takes the issues of creating an enabling business environment seriously. And this is as it should be. Gombe could rank very easily as a Sovereign State; its GDP is almost three times the GDP of Gambia and it is almost at the same level as the GDP of Liberia.

The very cerebral and amiable Vice President concluded by liking Gombe State to what the administration of President Muhammadu Buhari set out to do with commensurate compliance by the constituents States of Nigeria.

“As a progressive government, we remain committed to policies and reform efforts that are geared towards economic diversification and improved productivity. We are proud of the giant strides that Gombe State has recorded so far, but more importantly, we are confident of the successful results of the programmes currently being implemented by the State Government and those that are underway in the areas of health, industrialization, and agriculture”.

Now that the ice of economic development lethargy has been broken by the inimitable Inuwa Yahaya, what are the signposts of progress post-GOINVEST 2022?

From the contributions of summit participants and the recommendations, Gombe State is undoubtedly on an unrelenting less progressive swing toward economic success. This is because about a hundred of billion Naira is to be injected into the economy of the state as a pioneer investment by companies who have signed Memoranda of Understanding with the government.

Governor Inuwa Yahaya says it all in his own words as the visioner of the new economic architectural blueprint worthy of emulation by other state governments in Nigeria.

“I am satisfied with the responses from investors and the business community. Hundreds of investors have expressed interest to operate from the industrial park, and many more are willing. In the course of this summit, we will sign memoranda of understanding with some leading local and international brands to further demonstrate the success of our efforts” an elated Inuwa Yahaya said.

The overwhelming turnout of investors at GOINVEST 2022 cannot be overlooked. The crop of investors pooled together further accentuates the calibre of Summit Gombe State was able to hold successfully.

Signatures have been appended by various companies across the economic ecosystem of Nigeria indicating a readiness and confidence in doing business in Gombe state, with some of them truly and heavily committed to beginning operations by early next year.

Inuwa Yahaya, the Dan Majen Gombe, declared proudly at the Summit that, “Gombe is open for business. It is the destination of choice for investment in the northeast subregion. Not even the more than a decade-old Boko Haram insurgency or the covid-19 pandemic and its attendant global economic meltdown could slow our march towards progress”. The Governor said with finality that this is the leadership we promise. This is the Gombe State we are building, one that will serve as a model to the rest of the country and a source of pride to our future generations. Our march towards building a peaceful, prosperous and all-inclusive state must not be distracted.

The first-ever Gombe State Investment Summit has come and gone. One thing stands out for the administration of Inuwa Yahaya. It is not one that starts a project without accomplishing it. It is not a dress rehearsal government. Neither does it rank at all in the hall of white elephant regimes. Records of promises kept in the past are the attestation needed to expect a sporadic Industrialisation and economic development of the Jewel in the Savannah.

Welcome to Gombe, a land of new economic realities. This is a state with fertile ground for all kinds of investments.

“The successes that we have seen here in Gombe are substantially on account of the effective collaboration of the private sector, the State Government and the Federal Government. Our Federation benefits our people when the States and Federal authorities alongside private actors think and work together.”

“Let me again reemphasize the Federal Government’s pledge to work with the Gombe State Government, to give you all the support that you need in order to ensure that your businesses and the business environment succeed”.

Misilli is the DG of Press Affairs, Government House, Gombe