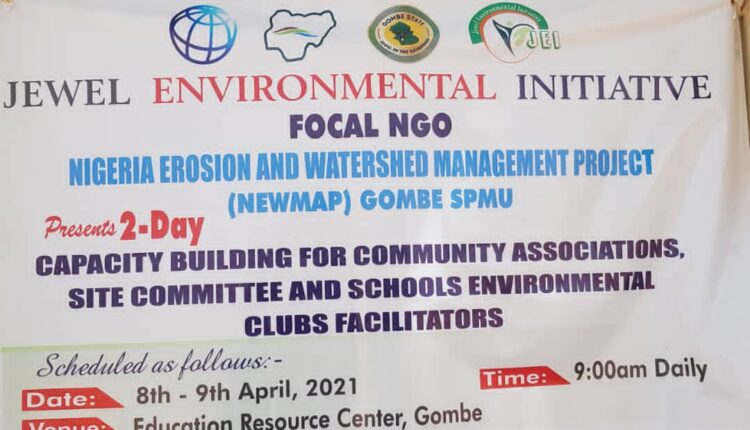 The Nigeria Erosion and Watershed Management Project (NEWMAP) and Jewel Environmental Initiative (JEI) have engaged no fewer than 100 persons in an effort to sustain erosion projects in various communities Gombe State.

Speaking during a two-day workshop which began on Thursday in Gombe, NEWMAP Project Coordinator for Gombe State, Mr Mohammed Garba, said NEWMAP prioritised the sustainability of the projects.

He said this was in line with the desires of donors and, hence, the workshop to ensure that projects were well maintained.

Our correspondent reports that the workshop, which drew participants from across various communities, is with the theme: `Capacity Building for Community Associations, Site Committee and Schools Environmental Clubs Facilitators.’

Garba, who was represented by his Communications Officer, Mr Richard James, told the participants to develop a strategic plan of looking after erosion projects in their communities.

He commended the commitment of the administration of Gov Inuwa Yahaya, adding that “Gombe State was enlisted into NEWMAP in 2015 and attracted disbursement in 2016 but nothing was done.’’

“But immediately this administration came up, we told Gov. Yahaya and barely two months of our request for counterpart funding of N500million, he gave us exactly N500 million.’’

On her part, the Gombe State Commissioner for Environment and Forest Resources, Dr Hussaina Goje, said the next stage was to ensure maintenance.

“Government cannot spend billions only for people to dump wastes into them again. This is why we have planned to build refuse collection centres around those areas, so please stop dumping wastes on drainages and gullies,’ Goje said.

Also speaking, Mr Ismail Bima, CEO of JEI, said that the workshop was necessitated by the need to ensure the sustainability of erosion projects in Kagarawal, Mallam Inna/Sabo Fagi communities and Gombe State University.

Bima stated that the World Bank assisted project, which is in partnership with the Gombe State Government, needed community backing for maintenance, hence the engagement to sensitise people to their responsibilities.

He stated that grassroots ownership of environmental projects was key in ensuring that wastes were not dumped in gullies, open defecation was discouraged and discouraging encroachment around such project.

“Our message is to let them know how to safeguard the project, because we are approaching the rainy season.

“We must tell them the effect of flooding and the consequences of their actions,’’ he said.

Bima commended the administration of Gov. Inuwa Yahaya of Gombe for paying counterpart funding for the project and planting one million trees annually.

He appealed to residents of Gombe to stop open defecation since government had enacted a law to ban such, “this is our appeal because our environment needs all the cares for it to sustain humanity.’’

On his part, Malam Haruna Bose, the village Head Mallam Inna-SabonFagi, said the site being worked on by NEWMAP and Gombe state Government had claimed lives and property during raining season.

Bose, while commending NEWMAP and the state government, said the project was a major relief in view of the fact that residents in various communities suffer during rainny season.

He also commended the JEI for carrying out awareness to communities on the need to protect the environment through planting trees and discouraging indiscriminate dumping of wastes.