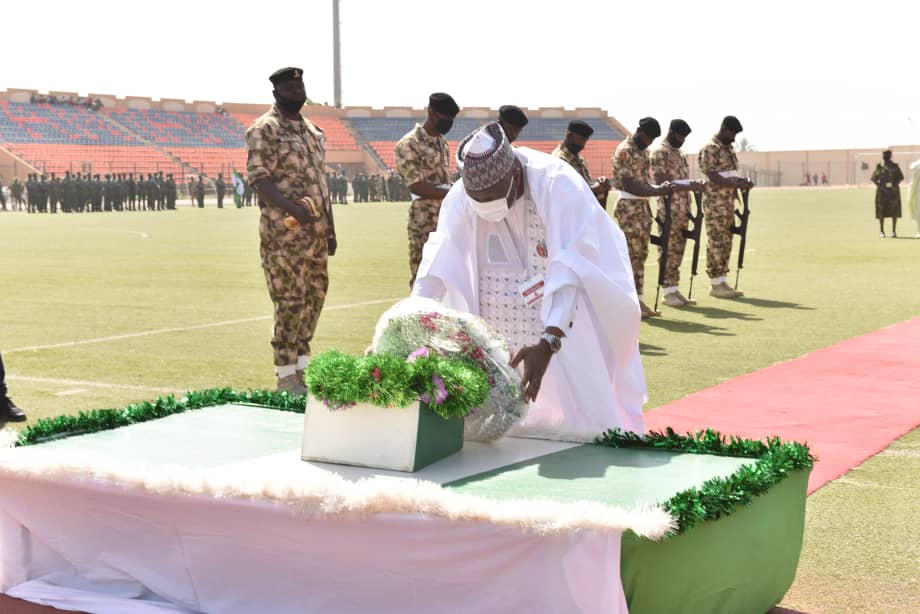 Governor Muhammadu Inuwa Yahaya of Gombe state has hailed the gallantry of Nigeria’s Armed Forces in tackling insecurity in the country.

The governor gave this commendation shortly after performing the wreath-laying ceremony in honour of the nation’s fallen heroes who paid the supreme prize in defence of the country’s territorial integrity.

Speaking to newsmen shortly after leading dignitaries in the wreath-laying ceremony, Gov Inuwa praised the gallantry and sacrifice of the nation’s fallen heroes and those in service, saying his administration will continue to assist security agencies in maintaining law and order in the state.

He called on the citizenry to continue to show solidarity and support to the living and fallen heroes as well as their families to boost their morale.

The Gombe State Governor also performed the symbolic release of white pigeons to symbolize peace, freedom, sovereignty and prosperity of the nation.

Among the dignitaries who joined the Governor in the laying of the wreaths at the symbiotic tomb of the unknown soldier, including the State Deputy Governor, Dr Manassah Daniel, Speaker of Gombe State House of Assembly, Hon. Abubakar Mohammed and the State Acting Chief Judge, Justice Mu’azu Pindiga.

Others are Commissioner of Police, CP Ahmed Maikudi, Commander of the 301 Artillery Regiment, Major J. David, Emir of Gombe, represented by the district head of Jalo Waziri, Commissioner of Internal Security and the State Chairman of the Nigerian Legion, Gombe State Chapter as well as the representative of the widows of the ex-servicemen.

It could be recalled that Governor Inuwa Yahaya had on Thursday, 14th January, launched the 2020/2021 Armed Forces Remembrance Day and Emblem Appeal Fund during which he announced a donation of 5 million nairas on behalf of his government and another 1 million nairas as a personal contribution to support the families of the ex-servicemen.

Special prayers were offered by both Christian and Muslim military clerics for the repose of the souls of the fallen heroes and the peace of Gombe state and the nation in general.