Speaking to newsmen at the residence of General Abubakar,  Governor Inuwa said he visited the elder statesman to check on his health and has been recuperating.

“General Abdulsalam is our father and elder statesman. Knowing him has been a blessing to us. I came to greet him as he recovers from the recent ailment that he had. I pray that God will continue to see him through his life,” he stated. 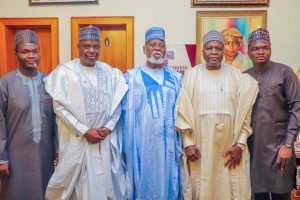 He said that the two former leaders are carrying out their duty in guiding and advising the citizens on how to live together as one, saying, “their efforts should be applauded”.

Asked to speak about the state of insecurity in the country, the Gombe State Governor said, “Gombe has been able to maintain its peace amidst diversity because the people have realized their differences early, and worked to address them”.

“In Gombe, you will find that some families have both Christians and Muslims, it is a cosmopolitan settlement and a small Nigeria. We realized our differences early on and seek to address them. We have tried to maintain peace and understanding in the spirit of nationhood and brotherhood”, he maintained.

On the chances of All Progressives Congress,  APC in the north-east geo-political zone, Governor Inuwa stressed that “we are strong in our resolve to win the 2023 general elections “.

Governor Inuwa was accompanied on the visit by the Managing Director of Lubell Nigeria Ltd,  Arc Yunusa Yakubu.

Tukur Mamu: From Negotiator to Suspect