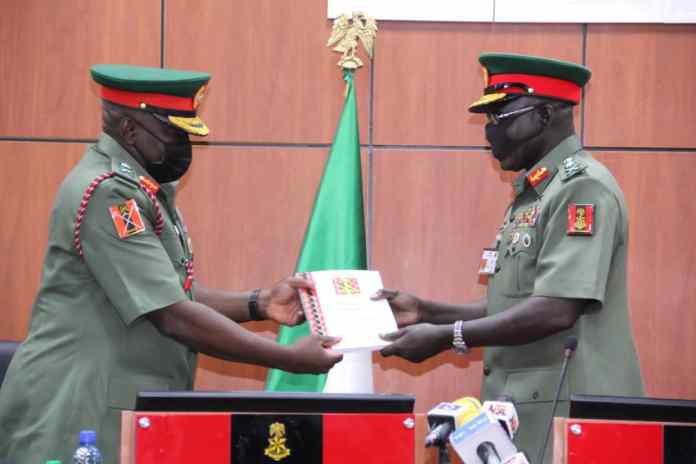 The immediate-past Chief of Army Staff (COAS), Lt. Gen. Tukur Yusuf Buratai, said the 66-month he spent as the number one officer of the Nigerian Army, was eventful as he recorded many remarkable successes and sterling feats as COAS between July 2015 and January 2021, when he held sway.

Buratai, made this known on Thursday at the Army Headquarters Conference Room, while handing over to his successor, Maj. General Ibrahim Attahiru.

Attahiru, was on Tuesday appointed by President Muhammadu Buhari,GCFR as the new COAS.

Lt. General Buratai, in a remark shortly before the ceremonial hand over noted that officers and men of the Nigerian army under his watch, became professionally-responsive, dedicated and committed to their statutory responsibility of safeguarding the territorial integrity of the nation against any internal and foreign aggression.

He equally said that infrastructural development, especially with regards to the construction and rehabilitation of several army barracks, schools, and hospitals, among other projects, was one of the lasting legacies his leadership bequeathed to the Nigerian Army.

In terms of improving security, the immediate-past COAS said aside degrading the Boko Haram terrorists and army troops reclaiming several towns and local governments hitherto under the control of the insurgents in the North East, the problem of insecurity was somewhat tackled during his tenure in office.

Buratai, while expressing gratitude to the entire officers and men of the Army for their tremendous support to him, called on Maj. General Attahiru to consolidate on the successes he would meet on ground.

Responding, the new COAS, pledged to sustain the giant stride achieved by the Nigerian Army under Buratai, adding that he considered himself lucky to have been allowed to succeed Buratai.
Earlier, the Chief of Policy and Plans, Lt.-General Lamidi Adeosun, said the former CoAS came, saw and conquered, adding that working with Buratai was a rewarding experience.
Adeosun, while extolling the virtues of Buratai, said that he had achieved so much for the Nigerian Army in terms of operational efficiency, personnel welfare and establishment of new units and formations.

He said that the army under Buratai had also progressed well in the area of research and development, especially in the area of manufacturing of hardware locally.
He expressed the confidence that the new army chief had what it would take to carry on with the big task left behind by his predecessor.
Adeosun commended President Muhammadu Buhari for appointing a worthy successor in the person of General Attahiru and congratulated Buratai for successful bowing out of service after years of meritorious service to the nation.