Insecurity: ‘Problem of Africa must be solved by Africans-Gen Yahya Tells African Leaders

Insecurity: ‘Problem of Africa must be solved by Africans-Gen Yahya Tells African Leaders 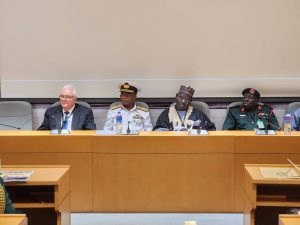 By Aisha A Rabo

The Chief of Army Staff of the Nigerian Army, Lt Gen Faruk Yahaya has advised African leaders to look inwards for solutions to the continent’s security challenges.

General Yahaya who was represented by Major General Victor Ezeugwu, the Infantry Corp Commander made the remarks at the 17th Security Watch Africa award which is taking place in Banjul, Gambia where he delivered the keynote address.

“The problem of Africa must be solved by Africans. It is time to look inwards and come up with solutions that can solve our peculiar security challenges. SWA’s initiative to honour Africa is a noble initiative and I commend them for that,” Gen Yahaya.

“He identified uncoordinated intelligence sharing by way of lack of harmonisation and sharing, too much control of Force Commands or regional bodies by home government and diplomatic rows as stumbling blocks to counterinsurgency operations in Africa.

Gen YahayaSolutions to our security challenges lie within us says
1,277
Share