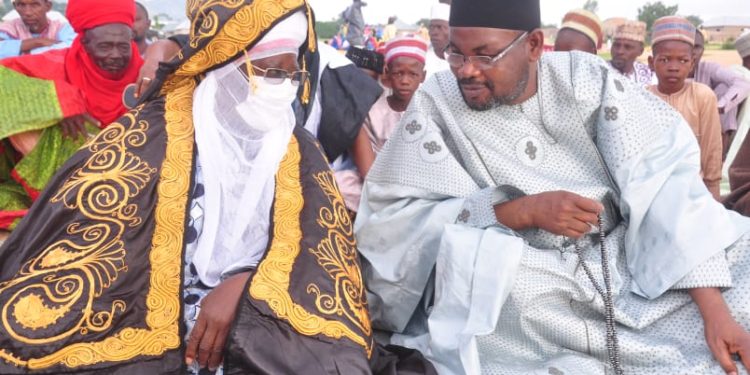 The Secretary to Gombe State Government (SSG), Prof. Ibrahim Abubakar Njodi, has urged the people of the state to imbibe the spirit of tolerance as a panacea to peaceful co-existence.
Prof Njodi who made the call during the Eid-Kabir Celebration in Kaltungo Chiefdom,  advised the people to pray for their leaders at all levels, adding that people must remain prayerful and cooperative with the government for progress and development to take place in the state.
Read Also: EID EL-KABIR: Dedicate Yourselves To Allah, Dr Dikwa Tells Nigerians
Njodi prayed for peace in the State and the country in general and appreciated Governor Muhammadu Inuwa Yahaya for performing well in fighting insecurity, which he said has brought about the execution of meaningful projects for Muslims.
Meanwhile, the SSG who had earlier joined the Muslim faithful to observe the two Rakaat Prayer at the Kaltungo Central Eid ground, stated that it feels great to relate with the people at the grassroots at a time like this.
He said that the large gathering of people at the Mai Kaltungo Palace for the celebration has proven that despite economic challenges the people of Kaltungo are happy with the efforts of Governor Yahaya’s administration especially in infrastructural development in the Chiefdom.
Speaking earlier to the crowds, Mai Kaltungo Engr. Saleh Mohammed, who receive the State Deputy Governor Dr, Manasseh Daniel Jatau, and other traditional title holders urged the Government to give their support in Cultural activities to Communities which serves as one of the ways of promoting integration and Unity in the society.
Engineer Saleh Mohammed also used the opportunity to plead with the state Government to engage the Federal Ministry of Water Resources through the Upper Benue River Development Authority to avail the People of the benefits of the Kaltungo Earth Dam build ten years ago.

The Occasion witnessed a mini Durbar which was graced by the Deputy Governor, the SSG, Government officials, District Heads, and well-wishers of Kaltungo Chiefdom.