I recently watched a video clip made by an old student of Fika Government Secondary School in which he showed how dilapidated the school is. It was first sent to me by a retired federal permanent secretary and later by a former minister of the federal republic. Among many others who sent the same clip to me is a friend who is a professor and a dean in Abubakar Tafawa Balewa University, Bauchi and another who is a state commander of the National Drugs Law Enforcement Agency. That means the video clip has gone viral.

Many of those who sent me the clip asked whether it was true. Some suggested I bring it to the notice of the Governor, His Excellency Mai Mala Buni. I appreciated all of them and thanked them for their belief and confidence that I would bring it to the governor’s notice.

I have not met and discussed it with the governor–yet–but I am sure he must have seen it by now. I am sure because I know he has his ears to the ground and has one of the best feedback mechanisms among the governors of the nation.

My take on the video is deep, as I explained to some of them who expected me to say something. Their unuttered query was like “being a journalist who knows the governor for ages and reports his activities, you must know something”. Therefore, tell them something without holding brief for those responsible, I have to.

The rot in education in Yobe State has eaten deep over the years. Perhaps right from its creation. Anyone who listened to the video would attest to that. The videographer’s first sentence gave him out as someone unfortunate to go to a Yobe school in the 1990s, as he said, when education imparted was half-baked. Throughout his lamentations, his rendition suggested someone who needed further teaching to redo the WAEC in English, at least.

But people believe that once a message is conveyed, then language can be blown to smithereens. Well, his message was loud and clear, but our concern here is the quality of education he got in the 1990s. Meaning the poor quality of education in Yobe predated the emergence of Honourable Mai Mala Buni as the governor of the state.

Therefore, aware of the decay in the state of education, Governor Buni’s first act as governor, pronounced before he came down from the podium on the day of his inauguration, was the declaration of the State of Emergency on primary and secondary education. He followed that up by hosting an Education Summit on the 1st of July, after which he set up a Technical Committee under the chairmanship of Professor Malah Daura, a former Vice-Chancellor of the University of Maiduguri.

To prove that it was not mere propaganda, that year he allocated to the education sector the largest share of N22.853b or 21.08%. In previous years education had very low allocations. 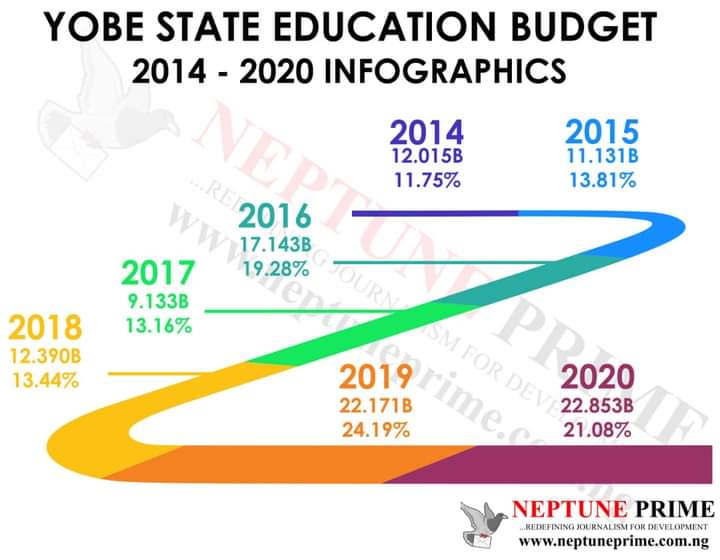 Reversing decomposition is not an effortless task. There are worse schools than Fika, in Yobe, unfortunately. Almost all the schools had not only dilapidated structures but the absence of such when he took over. Typical examples are schools with structures meant for about 2000 but harbouring over 20,000 pupils.

However, from 2019 to date, he has rehabilitated and expanded many of the schools in the state. Fika and others in a similar state of disrepair are on the agenda and I am privileged to know that already the process for their rehabilitation has been kick-started. Meanwhile, he has built from scratch 14 new schools comprising seven mega and seven standard model schools, with each having 24 classrooms.

While the video clip is an eye-opener, it is also an indicator of how intense the atrophy in education in the state is and for how long.

But if we should be fair, the rot predated Governor Mai Mala Buni’s ascension. Again, to be truthful, he came intending to better education in the state and he has started.

Gombe State Flagging Off Sales of Fertilizer for  2021 Cropping Season.

Re: Stop Boasting Over the “Industrial Park” project- Putting the Records…