Building Resilience Against Violent Extremism Insurgency and Terrorism (BRAVE-IT), a non-governmental organisation working in Borno State and North East is set to have a strategic collaboration with the Theatre Command Operation Hadin Kai.

This was contained in a statement issued by the spokesman of the organization, Ambassador Auwal Ahmad Umar on Wednesday.

According to the statement, BRAVE-IT works to help people in the North East using non-kinetic ways to solve the problem faced by the region. The organization focuses on developing coping mechanisms in the state to endure and overcome challenges. 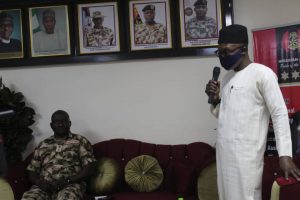 The Coordinator-General of BRAVE-IT Dr Abubakar Mohammed, Fellow of the Institute of Crisis Resolution Peace Building and Reconciliation while appreciating the Theatre Commander for granting them audience, congratulated the Commander on his appointment and commended the work of the command for their efforts so far. He stated that ‘’any organization that thinks it has a little kinetic role to play in terms of building peace in this state must first of all pay homage to this noble house.’’ He also added that BRAVE-IT is willing to collaborate with the command by passing credible intelligence to restore peace and wish the Commander and his team success.

Abbaji Kalli, Director of Intelligence and Surveillance of BRAVE-IT pleaded with the Command to increase its awareness programs and involve the traditional institution in the reintegration process to prevent what happened in Afghanistan.

The Theatre Commander, Major General CG Musa, in his remarks pointed out that people should understand that what is going on is a Nigerian problem and not a Borno or Northeast problem.  He called on all Nigerians to put hands together to bring an end to the insurgency as the Nigerian Armed Forces cannot do it alone because the kinetic approach can never bring it to an end but can only provide a conducive atmosphere for dialogue.

He added that talks are ongoing to sensitize the people on the importance of the surrendering process and to reach out to the insurgence that staying in the bushes and killing will never benefit them and they should come out. 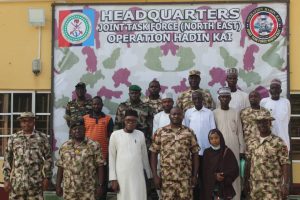 In his words, ‘’we have all been praying that let there be peace, maybe this is one way that God has opened that peace to come in. People should understand that bitterness eats you the individual, not even the person you are bitter about because it harms you more, but if you free your mind and allow God to take His own cause, naturally it will happen.’’

He appealed to BRAVE-IT not to relent on their effort as what BRAVE-IT stands for is critical to the success of the ongoing peace effort. He thanked BRAVE-IT for their commitment and sacrifice, he also encouraged them not to get discouraged.

2023: We are working to unify force – PDP Governors Forum