The Theatre Commander Joint Task Force (JTF) North East (NE) Operation HADIN KAI (OPHK), Major General CG Musa has charged troops of OPHK to stand up to their responsibility as defenders of Nigeria’s Territorial Integrity by neutralising every terrorist in the NE without mercy.

Maj Gen Musa gave this charge on Monday, September 19, 2022, during the graduation ceremony of participants of In-Theatre Train the Trainers’ Course Batch 4 of 2022 where a total of 5 Officers and 77 Soldiers graduated after a 2 weeks intensive course. 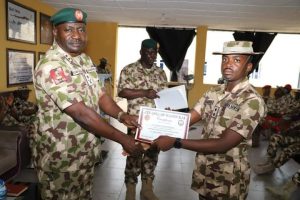 While addressing the graduands, the Theatre Commander emphasized the need for continuous training as it enhances troops’ professionalism, making them better soldiers.

He further enjoined them to put all knowledge gained into practice as well as transfer same to others in their various units and formations. 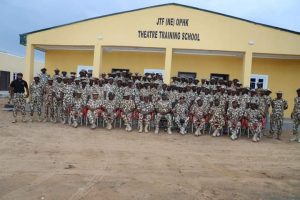 The event’s high point was the presentation of certificates, lessons learnt and course critic sessions, recognition and reward to participants who distinguished themselves during the training and the group photograph.

FRSC warns against carrying fuel in gallons on journeys