Hon Khamisu Ahmed Mailantarki, the Gombe State Governorship aspirant for the 2023 elections under the New Nigeria People’s Party (NNPP) has assured residents of the state and party stakeholders of effective and all-inclusive governance that would improve the wellbeing and welfare of people in the state.

Hon Mailantarki who gave the assurance on Wednesday at the party secretariat in Gombe said his ambition to serve as the next governor of the state was borne out of his need to improve the quality of life of citizens of Gombe State.

Our correspondent reports that Hon Mailantarki was given a rousing welcome by NNPP officials led by the state chairman Hon Maikano Abdullahi and supporters at the Gombe International Airport before proceeding to his residence and the party secretariat. 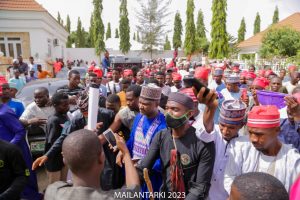 The former Federal lawmaker appreciated party officials for the show of support from across the 11 Local Government Councils of the state, noting that it signified unity in the party ahead of the 2023 general elections.

The sole NNPP governorship aspirant in Gombe State said NNPP had been reformed to give Nigerians and Gombe State indigenes good leadership at all levels of governance from top to bottom.

Mailantarki who explained how he clinched victory in the 2011 election under the then-new Congress for Progressive Change (CPC) platform where he won the federal legislative seat with a record-breaking landslide victory against the ruling PDP candidate, “even when people didn’t see it coming but due to quality leadership style coupled with effective grassroots mobilisation strategy, Allah made it happen.’’

“Almighty Allah gives power and leadership to whom he wills, he granted us legislative election victory in 2011 ahead of the then ruling PDP candidate and hence we are full of confidence ‘Insha Allah’ that the creator of the universe will grant us success to emerge victorious in the forthcoming 2023 gubernatorial elections under the New Nigeria People’s Party.’’

“We believe in the power of Almighty Allah that He is the one who gives leadership to whom He wishes, no power of any mankind will stop destiny, Allah’s willing we will ensure we deliver an effective government that will carry people along with an improved welfare and capital development with fairness across nooks and crannies of the state if elected come 2023.”
Mailantarki who is also a philanthropist and sports enthusiast called on party supporters across the state to aggressively mobilise support for the NNPP National Leader, Engr Rabiu Musa Kwankwaso to become the next president of Nigeria come 2023 to rescue the country and ensure better and new Nigeria that everyone would be proud of.

Earlier in his speech, the Gombe State NNPP Chairman Abdullahi said he was highly overwhelmed by the turnout of the party enthusiasts at the state secretariat for the historic events on the formal visit of the party’s gubernatorial aspirant.

He said “Your Excellency Sir we are aware of your track records and grassroots political base in the state, in addition to that the party have established a promising party structures from unit up to state level and all these structures are for you in other to ensure your victory in the coming 2023 general elections Allah’s willing”.

The party’s Board of Trustees Chairman in the state, Barr Yahaya Salihu on behalf of the party’s stakeholders and executives reaffirmed their loyalty at all levels towards the success of Mailantarki’s governorship aspiration as he encouraged citizens without voter cards to go and register in other to be eligible to vote for all candidates aspiring for different positions under NNPP.

Recall that the National leader of the New Nigeria People’s Party Dr Rabiu Musa Kwankwaso had recently endorsed Mailantarki when the latter paid him a courtesy visit in other to present his NNPP gubernatorial expression of interest and nomination forms to the former in Abuja.