The Chief of Army Staff (COAS), Lieutenant General Faruk Yahaya, in continuation of his visits to critical stakeholders across the nation as part of his key leadership engagement drive, has paid seperate visits to the Governor of Plateau State Right Honorable Simon Bako Lalong and His Royal Majesty Da Jacob Gyang Buba, Gbong Gwom Jos and Chairman Plateau State Council of Emirs and Chiefs. During the visits he reiterated the need for peace and unity on the Plateau and the nation in general. 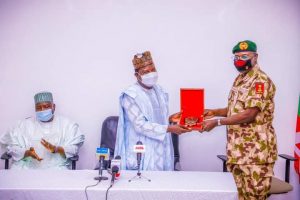 While in Government House, Rayfield, Jos, the COAS resonated the need for peace on the Plateau, where he reassured Governor Lalong and the good people of the state of adequate security, working in close synergy with sister services and other security agencies. He averred that Plateau State remains home of peace and tourism, adding that all critical stakeholders must work assiduously to restore the state to her glorious days.

The COAS used the medium to appreciate the Governor for the tremendous support he has been providing to security agencies in the state. He assured that the support of the state government will go a long way in enhancing ongoing military operations in the State and its environs. 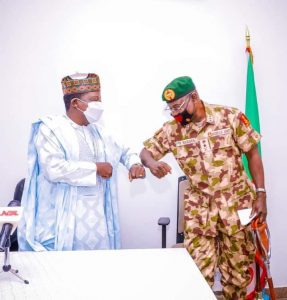 Lieutenant General Yahaya commiserated with the Governor and the good people of the state over the unfortunate demise of late Major General Abraham Luka Dusu, whom he described as a distinguished senior officer, a friend and course mate.

In his response, Governor Lalong congratulated the COAS for his appointment and commended him for his efforts in tackling security challenges since he assumed command. He also commiserated with the Nigerian Army over the demise of late Lieutenant General Ibrahim Attahiru and others who paid the supreme sacrifice while in the line of duty.

The COAS also paid homage to the Gbong Gwom Jos Jacob Buba Gyang, where he reiterated the critical role traditional rulers play in peace building in the society. He commended the traditional ruler, who is also the Chairman of Plateau State Traditional Council of Emirs and Chiefs for his efforts in propagating the message of peace on the Plateau. 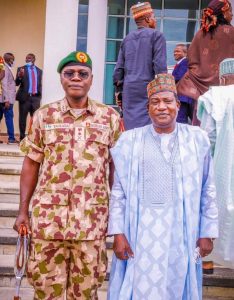 Responding, His Royal Majesty, Da(Dr) Buba Gyang expressed satisfaction with ongoing military operations in the state, adding that it is yielding the desired end-state. He further urged the military to remain focused and resolute in discharging their constitutional responsibility. He prayed God to continue to guide the COAS and his troops as they put their lives in harms way in service to fatherland and humanity.