The European Union in partnership with the Federal Government of Nigeria and the British Council marked the commencement of the 16 Days of Activism Against Gender-Based Violence 2021 with a stage play titled: “HEAR WORD” directed by Ifeoma Fafunwa. 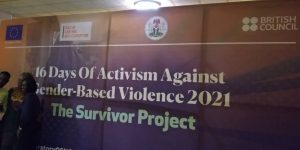 The event which took place in Abuja on 25 November, 2021 brought together people from all walks of lives among whom were foreign diplomats, to grace this event advocating for the Rights of women and girls.

Furthermore, the play showcased performers who accurately passed across the message of non-violence against women and girls to the keen attention of all the audience. 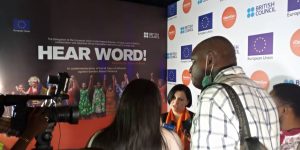 Speaking to the media, the EU Ambassador to Nigeria, Ms Samuela Isopi, expressed her satisfaction to have convened the event and thanked the Federal Government, British Council, and other stakeholders for their partnerships in making the day a success. She further observed that “the idea is to continue to advocate for policies that respect and protect the human rights of women and girls in Nigeria.”

According to the United Nations, the 16 Days of Activism against Gender-Based Violence is an annual international campaign that kicks off on 25 November, the International Day for the Elimination of Violence against Women, and runs until 10 December, Human Rights Day. It was started by activists at the inaugural Women’s Global Leadership Institute in 1991 and continues to be coordinated each year by the Center for Women’s Global Leadership. It is used as an organizing strategy by individuals and organizations around the world to call for the prevention and elimination of violence against women and girls.

The global theme for this year’s 16 Days of Activism against Gender-Based Violence is “Orange the world: End violence against women now!”

INVESTIGATION: How 11 Year-Old Jubril had his life almost snuffed out by his Senior…