But save for the death of the immediate-past COAS, Lt. Gen. Ibrahim Attahiru, who died in a military plane crash near Kaduna International Airport, Yahaya, perhaps, might not have had a date with history, or a ‘romantic’ kiss with fame–through becoming a COAS.

But at the moment, Nigerians can only bask in the euphoria of having him on the saddle as the Army Chief, especially, at a time what may be described as a menacing insecurity is still baring its fangs. 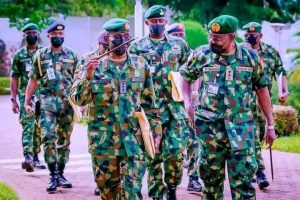 Determined to confront the lingering Boko Haram and Islamic State of West Africa Province, ISWAP insurgency, together with other security challenges, across the country, it would be recalled that the COAS immediately rolled out his Vision for the Nigerian Army, which is to have “A PROFESSIONAL NIGERIAN ARMY READY TO ACCOMPLISH ASSIGNED MISSIONS WITHIN A JOINT ENVIRONMENT IN DEFENCE OF NIGERIA,” upon taking over from his late predecessor.

Addressing senior Army Officers in Abuja, on May 31, few days after been appointed, General Yahaya promised that the Army under his watch will defeat terrorism with modern processes, strategies and tactics.

Yahaya said his command philosophy will rest on four pillars, which are namely Professionalism, Readiness, Administration, and Cooperation.

The COAS pledged to provide exemplary leadership to the Nigerian Army and serve as a rallying point for officers and soldiers while widely consulting with critical stakeholders.

His words: “Nigerian Army of the present must by necessity with the changing nature of the current situation, sit up and develop modern processes, strategy and tactic over our enemy in kinetic and non-kinetic battles, win hearts and minds and safeguard our territory.

Under Gen. Yahaya, troops of Nigeria, with renewed vigour, fighting spirit, and uncommon patriotism, have been deeply engaged in various operations, not only in the North East Theatre Command but across the country.

The flag off symbolically activated the exercises in four geopolitical zones of the country.

In his remark during the ceremony, Lt. Gen. Yahaya identified the exercises as Exercise Still Water, Enduring Peace and Exercise Golden Dawn, which he pointed out, will be conducted simultaneously in South-South, South East, South West and North Central Nigeria respectively.

These exercises, he added would seek to confront the multifaceted and contemporary security challenges prevalent in different parts of the country. He noted that the exercises aim to restore law and order in the affected regions, as well as create enabling environment for socio-economic activities to thrive.

The COAS stated that the exercises, which would later metamorphose into real operations would witness collaboration with other security agencies in exchange of ideas and sharing of intelligence.

Sometime in July this year, Gen. Yahaya, also inaugurated “Exercise Lion Heart” for the Land Forces Simulation Centre Nigeria (LFSCN) with a view to enhancing the operational efficiency of the troops.

Yahaya, who was represented by the Director of Courses, Department of Training (Army), Brig.-Gen. Ibikunle Ajose, said that the simulation exercise was designed to afford the personnel the opportunity to understand different scenarios of threats.

In recent times, the tempo of the counter-insurgency war, which have increased under the leadership of the COAS, has manifested in the surrendering of thousands of ‘repentant Boko Haram terrorists and their family members, in several parts of Borno State.

As a compassionate leader, Lt. Gen. Yahaya began his job as the boss of the Army with a visit to the wounded soldiers when he paid his maiden visit to the Theatre Headquarters Joint Task Force North East Operation Hadin Kai (OPHK) from 16-19 June to assess the operational and welfare state of the troops.

During his visit to the hospitals, he assured troops of adequate medicare and support in the ongoing counter-insurgency operations.

The COAS gave the assurances when he visited the 7 Division Hospital and University of Maiduguri Teaching Hospital (UMTH) to commiserate with the sick and wounded in action troops recuperating at the medical facilities.

While at the hospital, the COAS took time to interact with the soldiers and assured them of proper medical care and welfare, adding that their medical care is of utmost importance to him.

Faruk Yahaya, who was born on 5 January 1966 in Sifawa, Bodinga Local Government Area of Sokoto State, is a graduate of the Nigerian Defence Academy, Armed Forces Command and Staff College, and Nigerian Army School of Infantry.

He commenced his officer cadet training on 27 September 1985 and was commissioned into the Nigerian Army Corp of Infantry as a Second Lieutenant on 27 December 1990. He holds a masters’ degree in Master in International Affairs and Diplomacy.

Until his appointment as the COAS, Lt Gen Faruk Yahaya was the Theatre Commander Operation HADIN KAI, responsible for Counter-Terrorism and Counter-Insurgency operations in North-East Nigeria.

Gen. Yahaya, who is married and has four children, at the 2021 edition of the North East Star Awards, will be conferred with the ‘Collin Powell’s Meritorious Award for Soldiering’ (CPMAS). Lt. Gen. Yahaya has begun well in the office as COAS. It is only a matter of time before history and posterity deliver their unblemished verdicts on him, and his stewardship as an Army boss, in the nearest future.

Diversification of economy, panacea for socio-economic…

NYSC Gombe warns corps members not to fake sickness for…