The Current State of Education in Borno: Appearance and Reality

The Current State of Education in Borno: Appearance and Reality

It has become a common belief among Nigerians and by extension, the world over, that the importance of education to the overall development of any society cannot be over-emphasized. Given its plethora of importance, improving the educational sector has become a motif and mantra in virtually all political parties manifestoes since independence. It has since then become a rhapsody on the lips of many Nigerian gubernatorial and presidential candidates. Over the years, while quite a few had tried to remain true to their promises in education, myriads of others only use improving the educational sector during their electioneering campaign to hoodwink the unsuspecting masses into voting them into office.  Ironically, education has continued to remain one of the cynosures of various states and federal governments budgets since independence. However, it remains to be seen whether education in Nigeria since independence, has been from sublime to ridiculous or not. 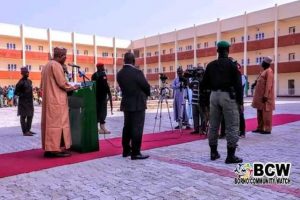 The people of Borno State, like many other states in Nigeria, have had their fair share in the dearth of proper education delivery, inspection, motivation and utilization, which has become a clog in the wheel of the state’s educational development. While many would argue that majority of the past administrations in the state only paid lip service to proper education delivery, I would say without much fuss that a few of the past governors did their best in the improvement of education in the state, but the icing in the cake which is proper inspection, motivation and utilization, were always missing.

The election of Prof. Babagana Umara Zulum as the Executive Governor of Borno State in 2019, renewed the hope of the people in their expected yearning for an educational system where quality education would be attained. The reasons for their renewed hope were because of a widely believed Zulums quintessential passion for education, coupled with his known mighty academic attainment as a professor, and the excellent feats he recorded during his stints as Rector, Ramat Polytechnic and pioneer Commissioner for Rehabilitation, Reconstruction and Resettlement [PPP].  Keeping all that in mind, no one doubted his promises in the area of education, during his electioneering campaign.

It is true that immediately after he was sworn in May 2019, at Ramat Square, he swung into action and hit the ground running, in the area of education. It is true that Prof. Zulum led administration within the last two years plus has undertaken over 200 verifiable, physical projects on education in the state, out of which over 135 are successfully completed while others which involve reconstruction after destruction by insurgents or rehabilitation and expansion, across twenty-one (21) LGAs are on-going. The list of the physical projects is endless. A walk across to where many of the schools are built would convince every progressive-minded person that the Governor has taste for quality things. It becomes more amazing to know that the schools are properly equipped. To say that Tijjani Bolori Memorial Day Secondary School and many others commissioned recently, are more beautiful than some tertiary institutions, is, to say the least. Not even the university I attended was as beautiful as they are. I looked at how amazing the schools are and wished I could go back to the primary and secondary schools. Granted that creating an enabling environment and providing the right facilities help to improve the quality of teaching and learning, but without proper supervision, motivation and utilization, the beautiful, magnificent school buildings and other facilities, are a waste.

The thought-provoking questions are: does the quality and beauty of the structures conform with the quality of teaching and learning attained in those schools? Can students churned out from them compete favourably with students from the private schools? Has proper supervision, motivation and utilization taken place in the schools in the state? Or are the schools like a white-painted sepulchre?

Yes, it is true that the Governor has shown his commitment to rebranding education in the state by sometimes paying unscheduled visits to schools, in order to ensure compliance in education delivery. That is laudable.  Yes, it is true that this present government, in a bid to ensure enhanced teaching and learning in the state, has ordered the assessment of all private schools in the state. That also deserves plaudits. Yes, it is true that Prof. Zulum aware of the adverse effects of inadequate teachers on the students and education in general has recruited over one thousand teachers within the last two years. But the questions again are, what is the quality of those employed? Has the government properly upgraded the teacher’s salaries and incentives? what has the government done to ensure that students eschew examination malpractice and realize the importance of buying textbooks that are relevant to their subjects?

In the distant past, the teaching profession was envy of other professions. The reason was that issues regarding the teachers’ welfare were not treated with kith gloves. They were truly respected, valued and were well-paid just as todays Hon. Commissioners.  Borno State government might have spent trillions in the building and equipping schools, but if there are no proper supervision and significant upward review in teacher’s salary, the whole exercise or money spent would be in futility. If teachers become well-taken care of, most of the best hands would start to fancy the teaching profession again, and that would weed out the teeming unqualified teachers in the state, which the Zulums led administration had tried to fight against. The government may succeed in flushing out the unqualified ones out of the system and replace them with capable hands -but who only are quasi teachers and teachers by accident. The end result is having teachers who are capable in terms of educational qualifications and knowledge but exhibit a lackadaisical attitude and lack of passion for teaching. This means that quality teaching and learning cannot still take place. Truth be told, perhaps only two out of a hundred persons would remain passionate about a job that can not comfortably put food on their table.

To be fair enough, Prof. Zulum APC-led administrations scorecard in educational delivery so far has been a step forward. However, a lot more needs to be done to complement the effort so far. There should not be room for complacency or euphoria in the belief that a lot has been achieved. That a large number of students passed their WAEC or NECO should not be used as a yardstick to measure the academic strength of the students, for we know that actually most of the students with excellent results in the said exams, cannot boast of crediting one subject in a malpractice-free examination.

The business of governance is highly complex therefore, all stakeholders, especially the governors cabinets should rise up to the challenge and up their effort, lest the billions already sank in education and the state-of-the-art classroom blocks, scattered across the state, would go down the drain.

The Current State of Education in Borno: Appearance and Reality
63
Share

INVESTIGATION: How 11 Year-Old Jubril had his life almost…

Army denies allegation of attacks by troops on Igbo…