Dr Mohammed Kyari Dikwa, the Founder And President of Al-Ansar Foundation, in Abuja, has revealed what his foundation is doing to upgrade the education sector of Borno State, the North East, and the country, at large.

According to Dikwa, his Al-Ansar Foundation, in recent times, has ventured into the establishment of educational institutions to bridge the waxing gap in education in Borno State, the North East region and even beyond.

He made the disclosure at the Bola Ajibola Auditorium, in Crescent University, Abeokuta, Ogun State, on Saturday.

This was when the renowned philanthropist was conferred with a Doctor of Science (D.Sc), Honoris Causa Degree, by the management of the faith-based University at the school’s 12th and 13th Convocation ceremonies. 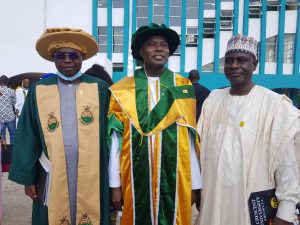 Dikwa, while observing that education plays a pivotal role in developing a country in every aspect, be it social, cultural or moral development, asserted that a nation develops in relation to its achievement in education.

Education, he further said, plays a pivotal role in fostering peace, unity and prosperity among the people of a nation.

“It has been well established that most of the social disorders being witnessed in our societies today are traceable to lack of proper and quality education,” he noted.

Dr Kyari Dikwa, a Fellow of the Chartered Institute of Taxation and Certified National Accountant, explained that their proposed Al-Ansar University Maiduguri will be the first of its kind to be established in the entire Kanem-Borno Empire and will be third in the entire North-East region.

“It is our firmed belief and conviction that when AUM finally takes off it will be one of the best universities not only in the North-East region but in the entire country.

“We are determined to build an institution where the teaching of moral rites, values and characters are held in the highest esteem, in replication of what Crescent University is doing in this part of the country.

“For this reason, we are determined and ready to partner with Crescent University in ensuring that the goals and aspirations of both institutions are attained,” he said.

The Al-Ansar Foundation boss noted that he was proud to be associated with the relentless efforts of Crescent University in producing some of the best brains that have made their contributions to the socio-economic and political development of the country nation, while also making the faith-based institution become a breeding ground for academic and moral excellence worthy of emulation.