As part of her activities in supporting women’s worthy initiatives and in marking the 16 days of activism to end violence against women and girls, the UN Women in partnership with the Federal Government of Nigeria and the European Union, launched a new organization called: The Forum of Women in Film and Television International (WIFTI). This new organization initiated by some renowned Nigerian actresses and female broadcasters is set to be a support system for women and girls in Nigeria.

In her remarks, Her Excellency, Dame Pauline K. Tallen, OFR, KSG, Hon. Minister of Women Affairs, who was in attendance emphasized the need for more empowerments for women and girls in Nigeria and she called on an effective justice system in the handling of cases of crimes against women and girls. She lauded the UN Women in their constant support to helping women and girls around the world as she showed her full support in the unveiling of the Forum of Women in Film and Television International (WIFTI). 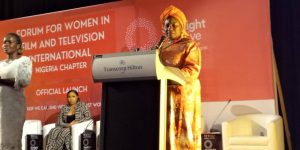 She further re-emphasized the words of WIFTI that “We are an army, and our weapon is saying the truth” while calling on all to speak up against violence on women and girls.

Ms. Ajoke Silva who is the WIFTI Nigeria Convener expressed her gratitude to all while making known her commitment towards the success of WIFTI.

“Our exco members did not resign – Gombe APC

INVESTIGATION: How 11 Year-Old Jubril had his life almost snuffed out by his Senior…